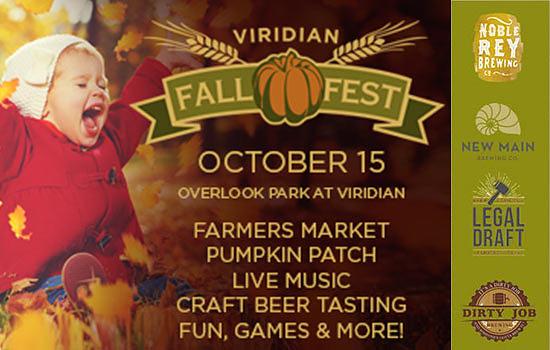 Beer — a simple concoction of barley, yeast and water — has been brewed and enjoyed by humans for more than 7,000 years. Of course, human ingenuity being what it is, the original beverage has gone through a number of iterations becoming as unique as the people that brew it.

Craft beers, then, can be said to be the culmination of thousands of years of experimentation, resulting in foamy, fermented beverages that are as nuanced in color and flavor as wine.

A highlight of Virdian’s Fall Fest, 8 a.m. to 3 p.m. Saturday, Oct. 15, 2016, will be an opportunity to sample a range of ales, stouts and lagers brewed up by Legal Draft Beer Company, New Main Brewing and Dirty Job Brewing. For craft beer rookies, here is a Cliff Notes’ overview of what to expect.

What the heck is craft beer and why do people get so excited about it?

According to the Colorado-based Brewers Association, craft beers must be small, independent and traditional. Of course that isn’t strictly true nowadays. “Small” means the brewery distributes no more than six million barrels of beer a year, but the granddaddies of the craft beer movement, Sierra Nevada and Sam Adams certainly brew and distribute more than that.

“Independent” means that less than 25 percent of the brewery is owned by a non-craft beer brewery (Anheuser-Busch InBev). Yep, many of the big beer companies are buying up the little guys, so a beer you think is a craft beer might not be.

“Traditional” means that the majority of the brewery’s output consists of “beers whose flavor derives from traditional or innovative brewing ingredients and their fermentation.” This is where it gets good and more than anything defines a craft beer and explains the popularity. People drink craft beer because its unusual and it tastes good.

You betcha. Many of the best craft beer brewers started out brewing beer in their basements. In the 1970s, some home brewers began selling their beers, often in microbreweries. Customers discovered they liked the taste better and supply outpaced demand.

At Fall Fest, the owners of New Main Brewing and Dirty Job Brewing are home brewers in the process of constructing their own pubs.

Sounds great! How do I know what’s good?

Well, it depends on your tastes. Newbies usually start with pilsners, bocks, and helles beers — all lagers. They have a clean, crisp taste and are similar to traditional American favorites such as Budweiser or Miller.

Once you have conquered those, move on to the ales. Ales tend to be fuller bodied with nice, foamy heads. Pale ales are “hoppy,” that is they are brewed with strongly flavored hops that create a very different taste from maltier stouts (side note: stouts are considered ales). When sampling beers start from the light beers and move to the dark ones, taking note of what you enjoy. Once you have graduated from stouts, experiment with fruit-flavored beers or anything else that sounds fun.

What flavors can I expect from a craft beer?

Beyond the initial smell and taste that is derived from its traditional ingredients, craft beer can also be sweet, sour, bitter, malty, spicy, fruity, nutty and even have hints of chocolate. That’s why an opportunity to sample a small amount of many different craft brews is both exciting and economical. It’s virtually impossible to find the brew that is perfect for YOU, without tasting several brands for comparison.

At the end of the day, the craft beer you fall in love with is the right craft beer for you — of course, there could be one you like better so it’s best to keep on sampling.

To start your first craft beer sampling, mark your calendar and plan to join us at Fall Fest on October 15, 2016.

See all of our upcoming events