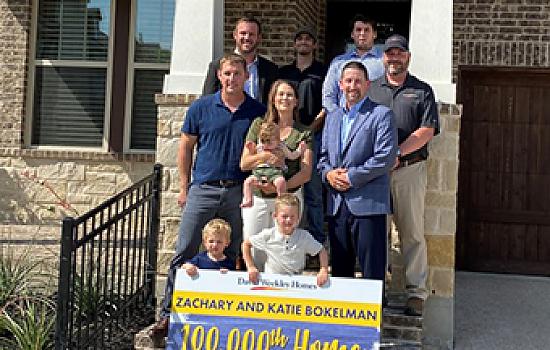 David Weekley Homes, one of the nation’s largest privately-held home builders, has achieved another incredible milestone in the company’s history with its 100,000th home closing since the company’s inception in 1976.

“We are honored to have had 100,000 families choose us to help fulfill their dream of homeownership,” said David Weekley, chairman of David Weekley Homes. “It is also a testament to the hard work and dedication of our team members to have accomplished such an amazing feat.”

Weekley’s 100,000th home was purchased by the Bokelman family in the master-planned community of Viridian, located in the Dallas/Ft. Worth suburb of Arlington. The Bokelman family, including Katie, Zachary and their three children, relocated from Pensacola, Florida, to Arlington for Zachary’s new job. While building their new home from the ground up from afar, the David Weekley Homes team kept them up-to-date on the home’s progress.

“Throughout the building process, the David Weekley Homes team ensured we were always in the loop by regularly giving us updates since we couldn’t just stop by the home to see how the build was going,” Katie Bokelman said. “They always kept us well-informed.”

To commemorate the company’s memorable closing, David Weekley’s Dallas/Ft. Worth division surprised the Bokelmans with a patio furniture set for their covered porch in their new home.

“We were surprised and very excited to find out we were the 100,000th David Weekley Homeowner,” Katie Bokelman said. “David Weekley Homes was not building where we used to live, so we had no idea the company had sold so many homes!