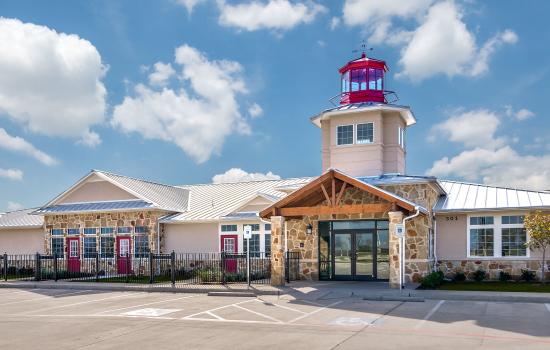 3RNV Holdings, LLC, has broken ground on a Children’s Lighthouse Learning Center in Viridian, the first in the Arlington master-planned community.

The facility, on a 2.16-acre site at 4000 Cascade Sky Drive, started construction in December and is expected to open by August, said Varun Sharma, owner of 3RNV Holdings. Danny Quinlan with Dan Quinlan and Co. represented Sharma in the land purchase and Jennifer Johnson with Johnson Development represented Viridian.

Children’s Lighthouse Viridian will be able to accommodate more than 200 children ranging in age from infants to school-age. The 11,000+-square-foot building will anchor outdoor spaces and large play areas. Because of the size of the property, Sharma said he may install a soccer field or basketball court.

“Usually only 1.5 acres is required, so with our excess land, we will be able to offer our parents more,” he said.

The building’s architecture will complement the Viridian streetscape, Sharma said.

“It will be very unique and appealing from an architectural perspective.”

Robert Garza with RPGA Design Group is the architect.

Sharma said he chose Viridian because he was looking for a community partner rooted in family values.

“Our desire is to contribute to the community in a meaningful way,” he said. “We wanted a community that values family and education and whose residents will appreciate the type of high quality education and service we will offer.”

Robert Kembel, general manager of Viridian, says having an on-site preschool will be a welcome convenience for residents.

“With Viridian Elementary already in the community and soon Children’s Lighthouse, parents of young children will have first-rate educational opportunities available right at their front door,” he said. “It’s an important milestone for Viridian.”

Ranked among the nation’s top-selling master-planned communities, Viridian has seen fast growth during the past two years. Builders sold 357 homes in Viridian during 2018, a nearly 25 percent increase over the record-breaking 2017. Robert Charles Lesser & Co. (RCLCO) recently ranked Viridian No. 37 on its list of the nation’s 50 best-selling communities in 2018. John Burns Real Estate Consulting lists Viridian tied for No. 42 on its annual list.