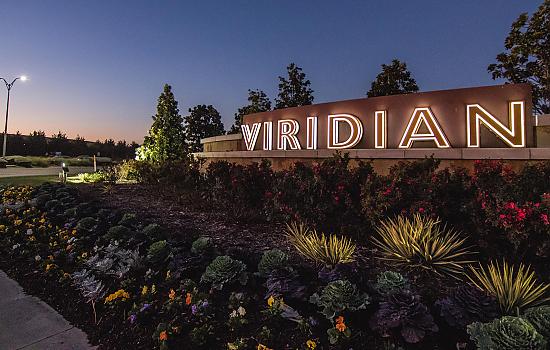 (Arlington, TX – Jan. 15, 2018) -    Viridian, a master-planned community located in Arlington, finished 2017 with more than double the sales from the previous year and is set to welcome its 1,000th homeowner in the near future.

Builders reported 287 sales in 2017, a 102 percent increase from the previous year. Fueling the surge in sales was the availability of more neighborhoods in the 2,000-acre community, as well as new builders and model homes.

“Having new homesites available was like opening up a dam,” said David DeVries, a Viridian resident who works with RE/MAX Pinnacle Group. “There was a lot of pent-up demand.”

Hundreds of homesites were released in the community during 2017, and builders opened 11 new model homes, 10 of which are grouped into a model home park.

“In addition, builders started 310 homes in Viridian last year and we had 244 families close on new homes,” said Debra Meers, marketing director. “I think location is key to our success. There just isn’t a lot of opportunity for new homes that are located about 20 minutes from both downtown Dallas and Fort Worth.”

A very generous slate of amenities also is a factor, at least for buyers Richard and Sharon Shen, who closed on their home in Viridian in December and expect to move in soon as the community’s 1,000th family. They are both bringing their mothers to their new home, so they had very particular requirements, including being close to amenities and having a tight-knit community.

“I loved the parks, the clubhouse, all the activities offered,” Sharon said. “Then I went to the HOA office and saw the calendar of events. I knew this would help me, my mother and mother-in-law connect to our neighbors.”

In addition to established parks, trails, a sailing center and a swimming complex boasting five pools, the Shens and other Viridian residents can enjoy several new amenities opened in 2017, including four new parks.

Ten production and three custom builders offer homes priced from the $250,000s to $2 million-plus in Viridian. It is a project of Houston-based Johnson Development Corp.