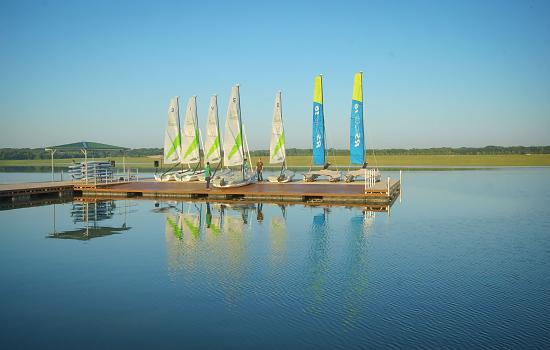 (Arlington, Texas – June 1, 2016) Viridian is elevating what homebuyers can expect in a master-planned community amenity package with the June opening of its newest feature, the Viridian Sailing Center.

Adjacent to Viridian Lake Club, the sailing center is a floating concrete dock on Lake Viridian that can accommodate up to 40 sailboats, which will be provided.

“Viridian Lake Club was designed as a true resort facility and the Viridian Sailing Center continues that concept by offering a yacht club experience,” said Robert Kembel, general manager of the community. “Members of the sailing club will have access to 16-foot catamarans and small single-hull boats such as Aeros, Quests and Optis that will be perfect for Lake Viridian.”

Residents and the public will have to join the Viridian Sailing Club to access the dock and boats. Family and individual annual passes are available, with residents receiving substantially reduced rates. Sailing classes will be offered, and members will have to pass a skills certification test before being allowed to use the boats. The sailing club also will offer kayaking and paddleboard classes and summer camps.

Captaining the Viridian Sailing Center is Rich Laffey, a certified sailing instructor who has held numerous leadership roles and taught adult and junior sailing classes at the Arlington Yacht Club.

While the Viridian Sailing Center will be member-only, the 250-acre Lake Viridian is open to the public, and non-motorized boats can be launched from its shore. The Viridian Lake Club is a resident-only, Mediterranean-styled recreation complex that encompasses five pools and a picturesque amphitheater that is used frequently for weddings. The facility’s second phase will add an 8,500-square-foot event center, an infinity-edge adult pool, four tennis courts and an event lawn.

“Viridian Lake Club is built on a peninsula extending out into Lake Viridian,” Kembel said. “With an extensive LED lighting system that tracks through a range of colors, the club is as beautiful at night as it is during the day.”

Viridian, a project of Johnson Development Corp., is a 2,000-acre master-planned community in Arlington, approximately 20 minutes from downtown Dallas and from downtown Fort Worth. An Audubon International “Certified Gold Sanctuary,” Viridian comprises lakes, waterways, gardens, trails and planned amenities. Also planned is a retail component that will bring shopping, dining and entertainment to the area. Viridian’s master plan ensures parks and open areas are within 700 feet of homes and that 50 percent of the community will remain wetlands, lakes and open space.