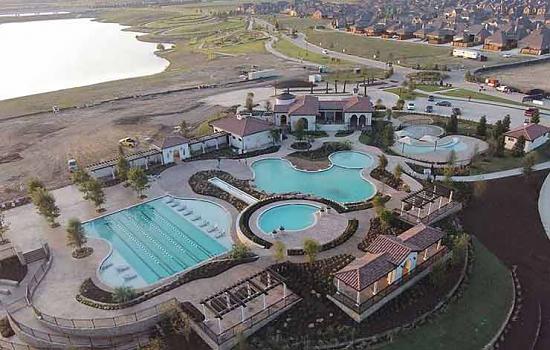 ARLINGTON, TX (July 16, 2015) — A partnership of The Johnson Development Corp. and Tricon Capital Group Inc. ("Tricon") has purchased Viridian, one of the top-selling master-planned communities in the DFW Metroplex.

"Viridian aligns with our core value of developing inspirational master-planned master-planned communities," says Larry D. Johnson, president and chief executive officer of The Johnson Development Corp. "We've had our sights set on the DFW market for quite some time and without question, Viridian is the perfect fit for us."

Johnson Development and Tricon previously partnered to acquire one of the largest available land parcels within the Greater Houston area, 2,046 acres in north Houston now known as Grand Central Park. The two firms also partnered in the purchase of the 3,200-acre West Houston master-planned community of Cross Creek Ranch, one of the nation's top-20 best-selling master-planned communities.

"Our new ownership will ensure Viridian's continued success as one of north Texas' premier master-planned communities," says Viridian General Manager Robert Kembel, noting the community's management team and master plan will remain intact. One of the nation's largest infill master-planned communities, approximately 1,000 lots have been contracted to be sold to 10 national and regional homebuilders, of which approximately 700 sales have already closed.

Viridian offers new homes from the $200's to the millions from a collection of the area's finest homebuilders. Model homes are open daily where homebuyers can review floor plans and tour inventory homes currently available. One of the only master-planned communities in Texas designed to meet Audubon Gold Signature Standards, Viridian was named a Certified Gold Signature Sanctuary by Audubon International for planning and environmental stewardship.

The community offers 500 acres of parks, recreational areas, trails and open spaces with another 600 acres of lakes, rivers, and streams ideal for fishing, sailing, canoeing, biking and walking, all strategically located within close proximity to every neighborhood. Half of Viridian's 2,000 acres are in protected, natural areas. In addition, River Legacy Park is adjacent to the community and features 1,300 acres of parkland along the Trinity River with biking trails and paddling trails. Located 20 miles west of downtown Dallas and 15 minutes east of downtown Fort Worth at the epicenter of the DFW Metroplex, Viridian is minutes from major employment centers, world-class shopping and entertainment venues. It also is 15 minutes south of DFW International Airport's southern boundary.

About The Johnson Development Corp.

Tricon is a principal investor and asset manager focused on the residential real estate industry in North America with approximately $2.5 billion (C$3.2 billion) of assets under management. Tricon owns, or manages on behalf of third party investors, a portfolio of investments in land and homebuilding assets, single-family rental homes, and manufactured housing communities. Our business objective is to invest for investment income and capital appreciation through our Principal Investment business and to earn fee income through our Private Funds and Advisory business. Since its inception in 1988, Tricon has invested in real estate and development projects valued at approximately $15.0 billion. More information about Tricon is available at www.triconcapital.com.