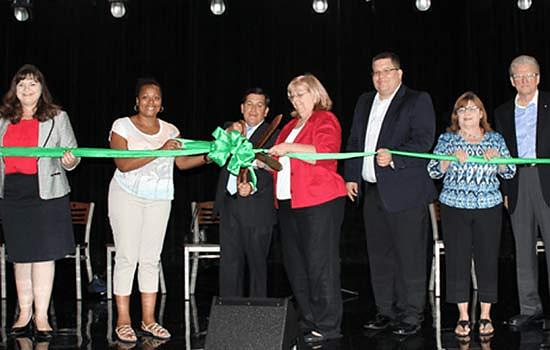 The newest elementary school in Arlington will offer Spanish immersion, an acclaimed music program and instruction in several world languages and cultures.

"We are beyond excited to be here," Principal Oscar Figueroa said. "This school has been 15 years in the making, and we are finally seeing our plans come to fruition."

The two-story school, at 4001 Cascade Sky Drive, will offer students an extensive curriculum and highly sought educational programs. Called an H-E-B School of Choice, Viridian will offer academic enrichment programs along with traditional subjects, such as reading, writing and mathematics.

Students enrolled in the School of Choice must apply for a spot and request a transfer to Viridian, where they will specialize in languages or music while taking traditional courses.

One noted program, Suzuki Strings, teaches children beginning in kindergarten to play strings instruments. It aims to help students grow their musical abilities while exceling in reading, math and science.

In Spanish Immersion, English-speaking students receive lessons in all subjects in Spanish. The program will begin at Viridian next year for first grade.

The world languages program seeks to expose students in the first through third grades to Arabic, Mandarin Chinese and Hindi language, culture, music and art. In fourth grade, students must choose one of the languages on which to focus.

Karen Campos, whose son, Zachary, a 6th grader, will study Mandarin Chinese at Viridian, toured the school Saturday with her family. "I am impressed with the entire school," Campos said. "This is awesome. The programs are top-notch. The staff is incredible. We have the most amazing, up-to-date technology."

And Viridian now even has an official mascot. Students voted for the Viridian Viper, with the colors green and beige.

As he shook hands with parents, Principal Figueroa said people often comment to him on the school's aesthetics, but he is even more excited about something else.

"It is a beautiful school, but it's just a building," he said. "I am most proud of the teachers, staff and students we have here. That's what makes this place so special."