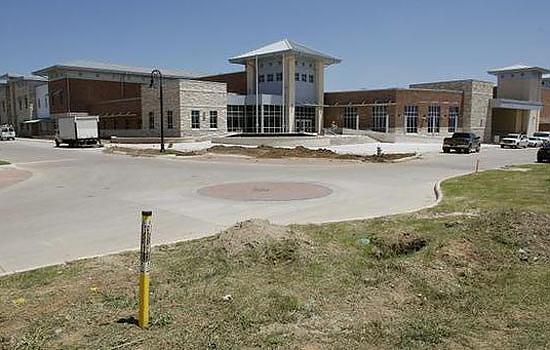 ARLINGTON ? Students have yet to walk the halls of Viridian Elementary School in north Arlington, but parents, teachers and school leaders are already forming a community around the Hurst-Euless-Bedford school district's newest grade school.

The school is the first new one in 10 years for the district, which is seeing growth in north Arlington and developments on Trinity Boulevard and Texas 10 in Northeast Tarrant County.

When the two-story building opens for classes Aug. 25 ? the district's first day of school ? it will serve about 450 youngsters from parts of south Euless and north Arlington, as well as students enrolled in specialized programs such as Suzuki strings, Spanish immersion and world languages.

"The entire district is excited," Principal Oscar Figueroa said. "We have already been doing lots of preliminary work. We've had early registration. We have been meeting families."

The school, at 4001 Cascade Sky Drive at an entrance to the Viridian master-planned community, is taking a blended approach to academic programs. It will be one of about eight campuses offering the district's Schools of Choice programs at the elementary level. The school will also serve children who live in the Viridian master-planned community and parts of the district's southern boundaries.

Schools of Choice are those that offer academic enrichment programs along with traditional subjects such as reading, writing and math. Elementary students specialize in languages or music while taking traditional classes.

The 90,000-square-foot campus is the district's 20th elementary school, The $21 million cost was financed with money saved for the school, according to the district.

The school, which can hold 870 youngsters, will have two major wings: one for fine arts, one for academics.

Figueroa said the public was told last fall that some students will be rezoned into Viridian Elementary.

"It is extremely exciting," said campus PTA President Joseph Geraty. "It's a great area. It's going to have great diversity."

Geraty said a meet-and-greet PTA picnic was held recently held at Inspiration Park in Viridian, a 2,300-acre development that has more than 100 families, walking trails, a lake and a dog park, as well as dozens of houses under construction. Eventually, plans call for Viridan to have 3,500 single family homes and 1,500 condos, town houses and apartments.

The event at Inspiration Park drew about 60 to 70 people. Families can stay connected on the campus's Facebook page.

Jeanne Miller, who will be teaching fifth-grade reading, writing and U.S. history, said Viridian teachers are ready "to jump in and get started."

"We love the idea that we get to set the new traditions and high expectations for years to come and we are excited for the first day of this upcoming new school year," Miller said.

Students enrolled in Schools of Choice programs must apply and request a transfer to the campuses offering the courses.

There are waiting lists for Suzuki strings, which will be offered at eight H-E-B campuses in the upcoming school year, Campbell said. Slots at Viridian are already filled.

The program aims to teach youngsters in kindergarten through grade 12 to play stringed instruments. One of its goals is enabling students to grow musically while excelling in math, science and reading, Jones said.

The school will also offer Spanish immersion and world languages.

The Spanish immersion program, under which English-speaking students learn their subjects in Spanish, will be offered in first grade next year. Viridian will more grades each year until they reach sixth grade, Figueroa said.

Slots for next year's Spanish Immersion classes also are filled at Virdian, he said.

In the world languages program, students in first through third grades are exposed to Arabic, Mandarin Chinese and Hindi language, culture, music and art. At the beginning of fourth grade, students choose one of these languages for in-depth focus during grades four, five and six.

There is a waiting list, Figueroa said. Once registration is completed, school officials will determine whether there are openings at each grade. Openings will be assigned to families on the waiting list.

In addition to Schools of Choice, the campus will offer the tuition-based Core Knowledge pre-k program. Families must apply for the the full-day program for 4-year-olds. Students are selected through a lottery. Annual tuition for this program is $5,800.

Both the Schools of Choice and Core Knowledge programs require applications and are typically open to students within and outside the district.